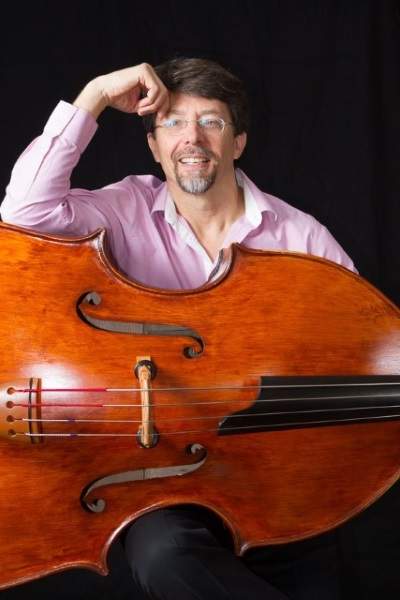 Proclaimed by the New York Times as "the master of his instrument," Jeff Bradetich is regarded as one of the leading performers and teachers of the double bass in the world today. Since his New York debut in Carnegie Recital Hall in 1982 he has performed solo concerts on five continents and in many of the major cities of the world. He has won many major solo competitions, recorded six solo albums of music for double bass and piano and has been featured on radio and television throughout North and South America, Europe and Asia.

Mr. Bradetich began his study of the bass at age 10 in the school orchestra program in Eugene, Oregon studying with Royce Lewis and cellist Dr. Robert Hladky. He gave his professional concerto debut at the age of 16 and was appointed to the orchestra of the Lyric Opera of Chicago by age 19. He earned both Bachelor and Masters degrees studying at Northwestern University with Chicago Symphony bassists Warren Benfield and Joseph Guastafeste. Other major musical influences include performing for ten seasons at the Oregon Bach Festival with Helmuth Rilling, one of the world’s leading Bach authorities, and summer study with Gary Karr and many of the leading double bass pedagogues in the US.

In addition to being an active lecturer and clinician, Mr. Bradetich has transcribed more than 100 solo works. He has produced both intermediate and advanced level instructional videos and numerous DVD recordings for Youtube including the first Bach cello suite and the first movement of the Elgar Cello Concerto. His recordings of the fourth Bach cello Suite and the Beethoven second cello Sonata will be released later this year. He has given more than one thousand master classes throughout the world including annual week-long workshops in the US, Germany and Hong Kong. He also served as Executive Director of the International Society of Bassists from 1982-1990 where he established the ISB Conventions and Solo Competitions. He was also editor of its magazine for 6 years.

Mr. Bradetich has taught on the faculties of the University of Michigan and Northwestern University prior to his 1994 appointment as director of the largest double bass program in the world at the University of North Texas. His students hold positions in major orchestras on six continents and occupy many important teaching and leadership positions throughout the profession. In 2011 he was honored by UNT as the first recipient of its Creative Impact Award - designed to honor the faculty member whose work in the literary or creative arts has had the greatest societal impact.

His book – Double Bass: The Ultimate Challenge, on pedagogy and performance on the bass, was released in 2009. Now in its third printing and considered one of the most important books of its kind in the past 50 years, it is now translated into Spanish and Chinese.