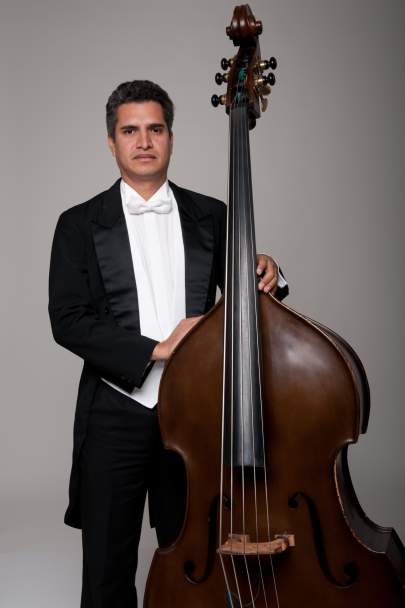 Hernan Matute started his music career in 1992 when he won the audition for the Orquesta Sinfonica de Carabobo, Venezuela. Currently he is the Assistant Principal Double bass player at The Miami Symphony Orchestra where he has been playing for since 2001. He is also member of the Symphony of the Americas and other chamber groups in classical, jazz, and international music. He has toured with many international artists. Some of them include: Luciano Pavarotti, Nestor Torres, Matteo Setti, Luz Marina, Saul Vera, Cristy Arias, Bolivar Soloists and El Cruzao touring around Germany, England, Denmark and Netherland. He presented a solo recital in Prague, Czech Republic during the European Congress of Double Bassists Prague 2016, performing his own compositions and arrangements for double bass solo and chamber group. He obtained a Bachelor Degree and a Master Degree in Double Bass Performance from Florida International University from the studio of Prof.Luis Gomez-Imbert. He has attended Master Classes with double bass greats such as Lucas Drew and Jeff Bradetich among others. Hernan teaches music and is currently choir director at St John the Apostle Catholic Church and School in Miami. He is a frequent guest lecturer of Music Appreciation at Florida International University and of Liturgical Music at the South East Pastoral Institute (SEPI) and all around the United States.